I mentioned in a previous post that I made homemade salsa, one day I will upload the pics of that in case anyone wanted to see them. Anyway, I thought it would be pretty cool to grow the ingredients for homemade salsa. Since I live in an apartment I can’t grow everything required but I thought I could at least grow tomatoes. I’ve never grown anything on my own, but when I was growing up we had a garden for a couple of years, so surely it wouldn’t be too hard. Famous last words.

I decided to be hardcore and start from seeds; I chose a packet of cluster tomatoes from Target. I planted them in little seed cups in the middle of March and kept them inside.

Everything seemed to be going well and when the chance of frost was gone I planted them in large pots outside.

I watered them every day, using fertilizer once a week and they grew to be huge. Still no tomatoes though. I had plenty of yellow blossoms but they would bloom and die with no tomato.

Finally on August 11th, after the plants had grown so much that they had taken over my porch railing, I got my first tomato. I ended up being able to pick three that day. I don’t have any pictures of how big the plants got, somehow I forgot to take that picture, but they were wrapped around the railing to the point where it was like a jungle on our porch. 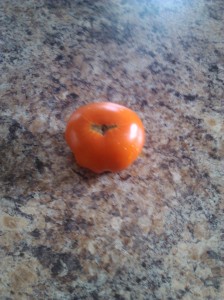 I thought at that point I’d start getting tomatoes regularly, the next batch that I was finally able to pick were too gross to eat. 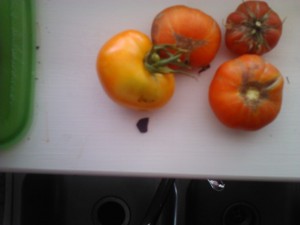 Unfortunately those were the last tomatoes I was able to harvest. I ended up cutting up the plants and disposing of them this past weekend. They hadn’t given me any more tomatoes and we will be traveling in a couple of weeks. While I was cutting them up to put in a garbage bag I ended up finding 15 tomatoes of various stages of growth that had been lost in the foliage; that is how thick the plants had gotten. Honestly I’m not sure if I really learned anything helpful with this experiment, but hopefully I will do better next year.