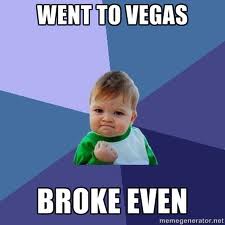 I did not expect this to happen in my first month of sales but somehow I have broken even. As in all the money I spent on the book (not including my time or my husband’s time of course) I have recouped. Admittedly I still need to get the book edited and while I like the cover I think there might be a better one out there, so there are still expenses that I will rack up on Stolen Memories; at least now I can use profits from the book to pay for them. There is also the matter of technically I haven’t received a payment and I won’t for a couple more months so I don’t know exactly what I will be paid but so far I have made enough sales that I should make enough to pay what I’ve spent. Also, I guess, there’s the fact that I will have to set aside some for taxes, though I’m not sure if I’ve made enough yet to worry about that. So maybe my celebration is a little bit premature but I don’t care. I am so happy and excited and a tiny bit scared.

Anyway in case anyone was wondering I’ll list my expenses, I’ve already planned out what I’m going to be doing for my next books (at least as much as I can) and this will end up being my cheapest book.

As you can see I did not spend a lot, I didn’t really have a lot to spend. I won’t be spending much on ink in the future (I say this after I’ve already spent another $15 on ink so that I can print off two episodes I’ve written on a side project so that I can edit them on my flight to Tokyo).I will be spending a lot more on covers, though I will have to wait until I get a job to do that so my next covers might be homemade. There is also editing which comes before covers on priority, covers sell books but I want my words to be better polished next time.

What finally pushed me over on sales were my first 2 sales in the UK. So thank you to all of my readers, especially the ones that liked my book enough to tell others to buy it.