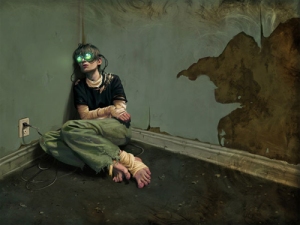 I have an addictive personality, self diagnosed so I’m sure it’s right. Only it doesn’t work with the normal things (drugs, cigarettes, alcohol). I did smoke for a time but I never got that “I must have nicotine now” feeling and I had no problems quitting cold turkey. I get addicted to games and to authors. It doesn’t really matter what type of game; though I’m not sure if I’ve ever been addicted to a board game, probably because you need more than one person. I’ll get addicted to a game sometimes just for a couple of days and other times for years.

I bring this up because my current addiction is a game called ChefVille on Facebook. I was hesitant to post this, I’m going to lose street cred as a hardcore gamer, but this blog has become a place where I feel like I have to be completely honest; even when it comes to exposing my guilty pleasures. 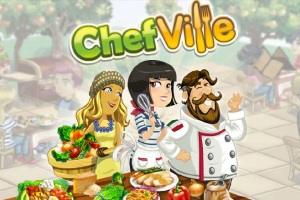 ChefVille is like most other Facebook games, you have energy that runs out and builds back up over time, there are tasks you have to accomplish, and items you have to unlock. Each recipe has mastery stars and you have to prepare it multiple times before you reach each level of mastery. I am a sucker for filling bars so that aspect of the game is very appealing. Once you’ve reached a certain level they also email you the real recipe. So far the recipes I’ve received required seventy thousand ingredients and days to complete, at least it seems that way.

Like other Facebook games if you don’t have friends playing the game you end up being screwed. You either don’t get to unlock certain things or you have to pay for them, with real money. Well you can sign up for credit cards and Netflix and all kinds of other things but I already have Netflix and I don’t need any more credit cards and I’m not looking for a new home loan. So unless I feel like going to their message board and friending a lot of people I don’t know or creating Facebook accounts for my cats I’m losing out on certain things.

The problem I end up having with Facebook games, this is not my first rodeo, is that it ends up becoming a second job.

“I would love to go out this Friday but you see my tomato soup will finally finish and if I leave it too long it will spoil. You know how it is?”

I’ve never said that but, and I’m ashamed to admit this, I did schedule my cooking around my flight to Japan so none of my food would spoil. Yes I know! I have a problem! I’m trying I really am…well not really. I ended up getting really angry this week because I thought I was going to miss out on maxing out a Halloween themed event and not getting the scary tree decoration, don’t worry I got the tree.

I just reread that sentence and I think I might have reached the point were I would be receptive to assistance. Is there a support group for Facebook game addiction?