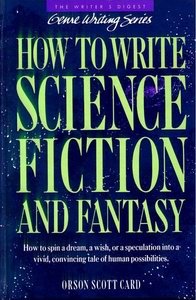 How to Write Science Fiction and Fantasy By: Orson Scott Card

From one of the all-time bestselling authors of science fiction and fantasy writing comes an excellent resource for beginners or pros. How to Write Science Fiction and Fantasy by Orson Scott Card covers topics such as the creation of worlds and alien societies and the use and rules of magic, topics specific to the genre. Learn creative science fiction and fantasy writing from one of the masters.

Whatever you think of Orson Scott Card’s beliefs he is known for his science fiction so I thought it would be interesting to read his book.

I learned some things that I should have done with my Amelia Bennett Chronicles books, though I don’t think they’ve suffered and I can certainly use what I learned in future episodes.

I decided that I never wanted to write hard sci-fi.

I was just starting to think, “Man he’s got a lot of rules for this stuff.”

When he blindsided me with some not nice things to say about Star Trek. I can see why hard sci-fi writer’s wouldn’t like Star Trek but if he felt that way he should have just not brought it up. Instead he brought it up a few times, each time to point out exactly where they fucked up. And each time it made me want to do exactly the opposite of what he recommended.

That’s just how I roll.

Anyway. He strongly recommends not writing prologues in event driven books. He basically says you’re an amateur that doesn’t know what you’re doing if you do.

He has a lot of rules, strong recommendations, and opinions on what a sci-fi and fantasy writer should do. Most of what he mentions is for sci-fi with some fantasy stuff thrown in almost as an after though.

“You can do this with fantasy too.”

Honestly I was never able to get over him dissing Star Trek so take my opinion with a grain of salt.

I thought the publishing information was pretty dated, since it was first written in 1991 there wasn’t any mention of self-publishing.

Overall I learned very little from this book and wouldn’t recommend it.